Hello and happy Friday crafting friends! I'm so excited to share a new card with you today featuring all dies. That's right, all dies, no stamps! Simon Says Stamp just released a new collection today called, Friends, and I used all six new Picture Book animals along with some previously released dies to create this little safari scene card! 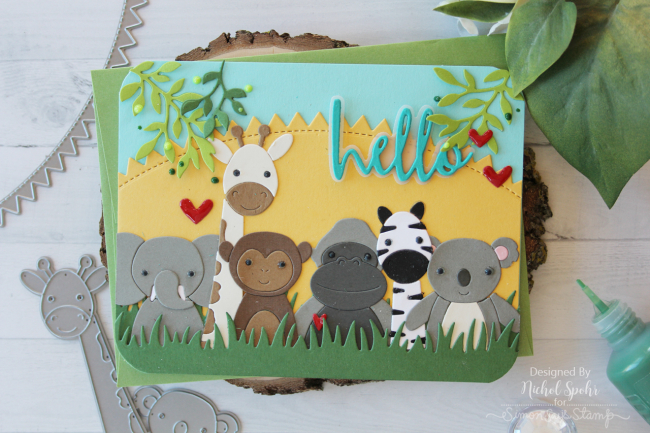 I started by building the background die cut scene for the card by die cutting Lawn Fawn Sunflower Cardstock with an Arched Stitching Border Die. I adhered the "sun" to a Lawn Fawn Mermaid background. Grass borders were die cut from Noble Fir Cardstock using a Lawn Fawn Grassy Border Die and adhered along the bottom edge of the scene.

Leaves were die cut from Cilantro and Noble Fir using the Forget Me Not Dies and adhered along the top edge of the card to frame up the design.

Hearts were die cut from Chili Pepper Cardstock using the Mini Hearts Dies. The hearts were adhered to the design as shown.

Nuvo Crystal Glaze was applied to the hearts and the eyes of the animals.

Nuvo Crystal Drops in Woodland Green and Apple Green were adhered to the design.

A 1/2" corner rounder was used to finish the card. 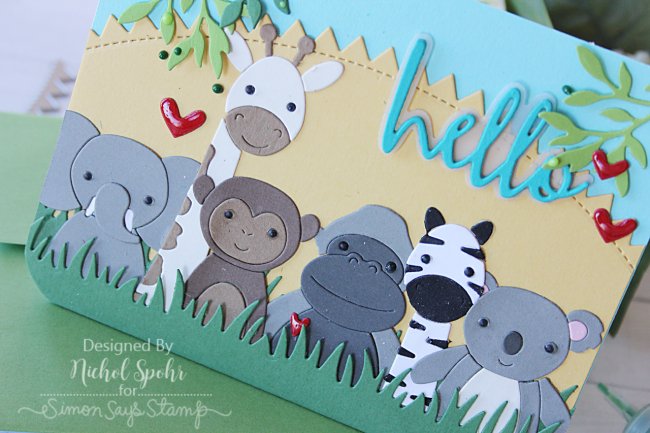 Watch the creation of this entirely die cut card from start to finish below or click HERE to watch in HD:

Below you will find links to the supplies used to create this project(s). Click the icon for the store underneath the thumbnails to start shopping. Where available I use compensated affiliate links at no extra cost to you. Your support helps me to keep bringing you new projects and videos. Thank you!

Shop the entire Friends Release by clicking the thumbnails below:

Such an adorable card!

Very cute card, Nichol. I can't decide if the giraffe or the zebra is my favorite. These dies would be great for one of your tri fold cards. You could use the whole picture book gang. Thanks for the inspiration.

Your card is so cute. I can,t wait to get the picture book dies. I love them all.

Oh. My. Cuteness. Great job making one of the cutest cards around! This card could be so versatile...baby shower, birthday, friends card, etc. Thanks for giving me great ideas!

Oh my !! Your card is absolutely fantastic !!

What a fabulous card!! All these picture book images are super cute without being too cutsie. I've noticed that I lean toward diecutting and often make cards with next to no stamping. I'm not the best at stamping and so that's probably why if I can make what I've got pictured in my mind without having to stamping I'll do it!!

Oh my goodness! Such an adorable card, I love all those animals in there

This is only a preview. Your comment has not yet been posted.

The letters and numbers you entered did not match the image. Please try again.

As a final step before posting your comment, enter the letters and numbers you see in the image below. This prevents automated programs from posting comments.

Having trouble reading this image? View an alternate.

(Name and email address are required. Email address will not be displayed with the comment.)