Today I have an interactive mini pop up box card featuring so many new stamps and dies as well as new patterned papers and cardstocks from the Fall and Winter 2018 Release!

Watch the creation of this interactive mini pop up box card from start to finish below or click HERE to watch in HD:

Not only is the front of the card adorned with this sweet Winter Skies scene but the inside of the card features and interactive mini pop up box sure to make the recipient smile!  The front panel was die cut from smooth white cardstock using the new Landscape Snowfall Die. The panel was adhered over Pixie Dust Sparkle Cardstock for a subtle glittery snowfall effect. Borders were die cut from a Woodgrain Neutral Cardstock using Stitched Hillside Borders dies and a tree border was die cut from Noble Fir Cardstock using the Forest Border Die before being layered and adhered along the bottom edge of the scene as shown.

Part of the sentiment from the Winter Skies stamp set was stamped on a banner die cut from Chili Pepper Cardstock using a die from the Mini Pop Up Box Die Collection using the new Lawn Fawn Embossing Ink and heat setting with white embossing powder.

The polar bears and trees from the Winter Skies stamp set were stamped on smooth white cardstock using Jet Black Ink, colored in with Copic Markers, and die cut with the coordinating dies before being adhered to the design as shown. 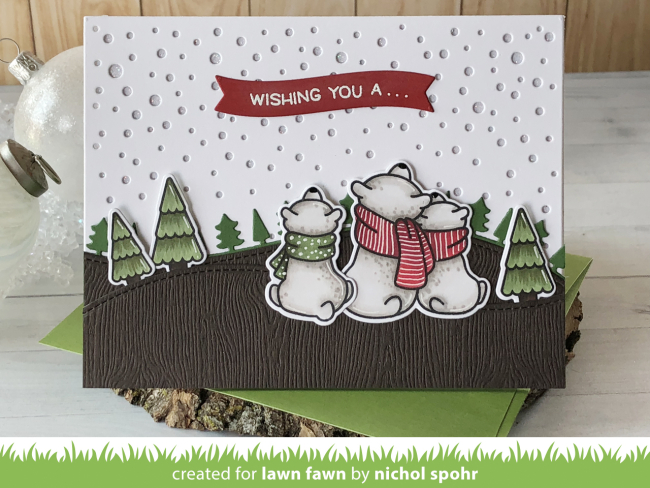 The Mini Pop Up Box Die Collection was used to create the pop up box for the inside of the card. Panels for the side of the pop up were die cut from the Knit Picky 6x6 Paper Pad and adhered to the sides of the box. Confetti pieces were die cut from Holiday Sparkle Cardstock and adhered to appear to be springing form the pop up box. Another banner was die cut, stamped and adhered to the box to complete the sentiment. The polar bear from the For You Deer Stamp Set and the santa hat from the Hats Off To You Stamp Set were stamped on smooth white cardstock, colored in with Copic Markers, and die cut with the coordinating dies before being adhered to the design as shown. 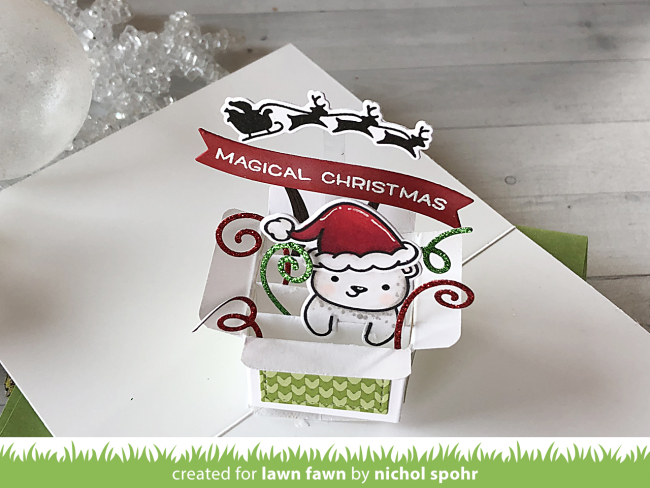 Below you will find links to the supplies used to create this project(s). Click the icon for the store underneath the thumbnails to start shopping. Where available I use compensated affiliate links at no extra cost to you. Your support helps me to keep bringing you new projects and videos. Thank you!

Such a fun creation!! :) I love the surprise popup element! :)

I love this card - it is adorable!

That's a brilliant die. I love hearing your excitement over that box. So fun!

Hi Nichol. I'm doing some binge watching on your YouTube channel to get caught up. This card is adorable! I like how you included the back of the bear. It gives the bear a nice finished look when you look at the box from different angles. Thanks for sharing.

This is only a preview. Your comment has not yet been posted.

The letters and numbers you entered did not match the image. Please try again.

As a final step before posting your comment, enter the letters and numbers you see in the image below. This prevents automated programs from posting comments.

Having trouble reading this image? View an alternate.

(Name and email address are required. Email address will not be displayed with the comment.)